8:30 PM is the twelfth episode of the first season and the 12th overall episode of Chicago P.D.

8:30 PM is the second installment of the two episodes of the two night crossover event between Chicago Fire and Chicago P.D.. Chicago Fire's A Dark Day is the first and this episode concludes it.

In the final hour of the crossover event with Chicago Fire, Intelligence hunts down the culprit behind the hospital bombing while Burgess awaits news about how her niece is doing.

The final hour of the crossover begins right where Chicago Fire left off - with Shay unconscious on the floor. Burgess and Atwater alert attendants and carry her to a room where medical staff work hard to help replenish the blood she lost and properly patch her wound. Shay wakes up later with Severide by her side, not happy about Shay's decision to keep the injury a secret. But now first responders outnumber the victims; Shay can relax and recover.

In ICU, Burgess' niece, Zoe, remains in serious need of a new liver, and somehow she's not even the worse case. Right next door to her lays Imogene, post-surgery, no longer registering any brain activity. The news makes it to her sister Holly and their parents: Imogene has a zero chance of life Voight and the rest of Intelligence receive an FBI briefing at the makeshift command center in the hospital. Leads are scarce despite dozens of witness and victim interviews until Jin pulls prints off the second bomb and ID's a Paul Watts. The team tracks him down... and finds him dead, in a murder dressed to look like a suicide. A list of his known associates triggers Olinsky's memory - he interviewed one of them. When they locate the suspect, Vaughan, at the hospital, he panics and takes Lindsay hostage with a knife to her neck. He refuses to back down, but thankfully firefighters Cruz and Mills blindside him from behind and free Lindsay. Close call.

Vaughan finds himself detained in a room with the last person he'd want to see: a furious Hank Voight. With Olinsky standing guard outside, Voight implements his no-holds-barred style of interrogation to learn the name of the bombing mastermind: Ted Powell, a major player in the anti-government fringe movement. Turns out Powell knocked off Watts because Watts screwed up the bomb timing - it was supposed to detonate at 8:30 PM. As the team mulls this over, Powell issues an official statement on a fringe website: he not only declares war on the fire and police departments, but warns them it's just begun.

Antonio interviews Frank Powell, Ted's imprisoned father, to offer a deal in order to give up his son. It quickly becomes clear that Frank not only has zero interest in cooperating, but he's also an unrepentant racist. However, a list of his recent visitors sparks another lead - and another dead body. This time it's in a warehouse that Halstead and Ruzek enter through the roof. There, they also find evidence of a third bomb, likely hidden in a white van near police headquarters... and set to go off in half an hour. Intelligence speeds downtown, locates the van - disguised with blue paint - and calls in the bomb squad to disarm it. Meanwhile, the crew spots Powell on a roof nearby awaiting his big moment. Voight and company jump into action, now on a race to detain him before the bomb detonates. They end up in a tense shootout on the roof until Voight bursts through and shoots Powell in the shoulder. Goaded by the insane criminal, Voight holds him over the edge of the roof and relents only when Sumner relays that they dismantled the bomb. Voight slugs Powell in the face for good measure before slapping on the cuffs.

Back at the hospital, Dr. Arrata stands by the two rooms with dying girls and hits on an amazing idea. Imogene shares the same blood type as Zoe; her liver could save Zoe's life. Armed with permission from Imogene's parents - both wrecked with emotion - he enters into transplant surgery. The entire unit waits outside Zoe's operating room with Burgess until Arrata emerges with news... Zoe will live.

Finally able to relax, Lindsay drinks a beer at her apartment - only to have Severide knock on her door. This time she lets him inside and things heat up. They kiss in her bed, but Lindsay puts it on pause. She has one request: stay the night. After the day they've had, Severide understands. And he's not going anywhere. 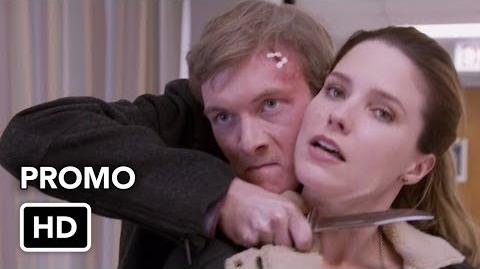