A Beautiful Friendship is the fifteenth, and final episode of the first season and the 15th overall episode of Chicago P.D.

Atwater is settling into intelligence whilst Antonio is recovering. Lindsay realizes she has no way out and confides in Voight. Jin is confronted about his meetings with Stillwell.

Lindsay stops Charlie from hitting his ex, who is bleeding. She is angry and tells him to leave but he refuses. He says he will tell everyone what Erin and Annie did, saying that he took the blame for them but unless they both pay him a considerably large amount of money, he will tell their secrets to everyone.

Voight is approached by Edwin Stillwell, who demands money. Voight says he will get his share and leaves it at that. Intelligence tends to a murder of a guard near a construction site. Voight tells Atwater to followup with a few contacts he knows near the site with Olinsky - there is some tension between the two as Atwater first says that he can do it himself.

Antonio is told he must stay back, as he is just back on the job after getting shot.

Jin is on the phone with Stillwell and is approached by Lindsay, who asks him for a favour without telling anyone. She then asks Antonio to help her with Nadia. Nadia is getting our of rehab and Lindsay asks Antonio to pick her up as she's busy. He agrees but hesitantly. He meets Nadia outside the rehab but she is hesitant to get in, feeling paranoid around him. He is annoyed but apologises and persuades her to come with him.

Burgess is on duty with another cop after Atwater's promotion and isn't happy with it. She is with a sleeping cop and sends a picture of him to Ruzek. She makes him tend to a robbery alarm at a takeaway. Her partner puts it off as fake but she realises it's real after seeing the painted security camera's and open registers. They leave and she calls for backup much to her partner's surprise and runs back in to chase the robber. She catches him and her partner is very surprised. Burgess is later told she will be getting a new partner.

Ruzek and Halstead end up following on the lead to Charlie. He is tied to the construction site lead and ends up saying things about Lindsay. When they come back, Halstead asks Lindsay what she's done and that she should tell him or Voight, since he always bails her out. She refuses to answer, saying that she cannot tell Voight or she will be "done".

Jin meets with Stillwell again, who is asking for solid intel on Voight. He is clearly shaken and scared but is threatened by Stillwell on his father. Afterwards, Jin sees Voight waiting for him. Voight makes Jin drive to an abandoned place and threatens him when they get out of the car, physically and verbally. He asks Jin who he works for, Jin replies it's Voight.

When Voight is back at the precinct, a scared Lindsay is waiting for him. She comes into his office and starts crying, talking about Charlie and her past and he comforts her. Antonio then also opens up to Voight about his own marriage problems as Laura doesn't want him back at work after the shooting. Voight reassures him.

Atwater, Ruzek and Halstead meet up with Atwater's contact near the construction site - Briggs. Atwater tries to fit in and pretend they're also 'one of them' but Halstead is annoyed and tells them they're cops. He says unless he gives them everything they know about the site, he'll spread the word around the neighbourhood that Briggs is a CI - this works.

Voight and the team are told by a CI that Charlie is planning on breaking into a jewellery shop with explosives. They handcuff Charlie, who immediately begins to yell that he knows about a murder several years ago and who did it. Charlie later confesses to Lindsay that it wasn't him who murdered the guard at the construction site but he knows who did - Red.

Ruzek and the team followup on another lead and walking around the area, he is shot at. The team chases a van that flees the area but Lindsay shoots the tires and one of the men is also shot. Afterwards, Voight hands Stillwell $5000 which he says is untraceable.

The finale shows Jin worriedly and hurriedly telling his dad to pack and get ready to leave town while he packs something in an envelope. Burgess finds Ruzek at her door and they kiss. Dawson comes home to find that Laura has left him with their children. Voight is called to a crime scene where Jin has died. 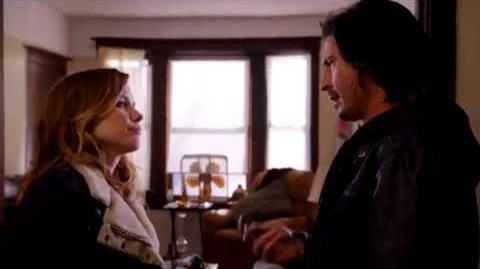