Breaking Point is the seventeenth episode of Season 5 of Chicago P.D.

When a prominent Alderman known for his urban revitalization efforts is killed, Intelligence looks into the corruption haunting his neighborhood. Meanwhile Olinsky feels pressure after receiving an ultimatum from Woods. 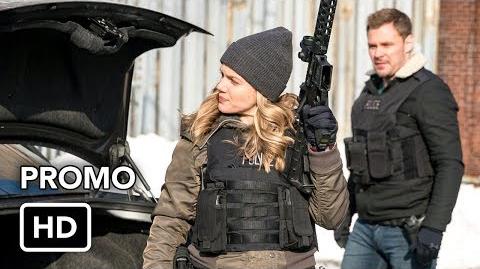 Voight: Everybody's got a breaking point, Al. No matter how strong you are.
Olinsky: No, not everyone.

Woods: See, you're protecting Voight because that's your code. But you're the last of a breed. Loyalty above all else. Let me ask you something. Do you think Voight would fall on his sword to protect you? Nah, he wouldn't.
Olinksy: I know Voight.
Woods: I do too.

Voight: Man, this isn't about yoga studios or condos or destroying black culture. We're standing in the middle of the heroin highway. This is about drugs.

Upton: Hey, why do you think IAD picked up Olinsky?
Halstead: I don't know. With Olinsky, you may never know.

Retrieved from "https://chicago-pd.fandom.com/wiki/Breaking_Point?oldid=13218"
Community content is available under CC-BY-SA unless otherwise noted.