Monster is the ninth episode of Season 5 of Chicago P.D. It is also the 93rd episode of the series.

The death of Judge Tommy Wells' daughter puts Intelligence on the track of a pill mill spreading into the suburbs of Chicago and the doctor enabling it. Meanwhile, Voight discovers who's been leaking information from the 21st.

The episode begins with Adam meeting up with Denny Woods regarding their deal. Denny is annoyed at Ruzek for giving him the video of Halstead's bar fight instead of something dirty of Voight, but Adam tells him no. Denny instead threatens him, telling Ruzek that his sister will go to jail if he doesn't give him something actionable.

Jay wakes up after getting a text from Hailey asking to meet her. Before he can get out of bed, Camilla Vega, who he is now in a secret relationship with, wakes up asking where he is going. Jay lies and tells her how he has a job interview. Before he leaves the room, Camilla calls out "Ryan", his undercover name, showing that Jay hasn't told Camilla who he really is. Hailey is undercover at a kid's soccer game trying to befriend Julianne Hudson to buy drugs for her back pain. Julianne asks a neighbor to drop off her kids after the game and she takes Hailey to her dealer. Hailey gives Julianne the money and Julianne tells her to wait in the car while she goes inside the store to buy the drugs. When Julianne leaves the car, Hailey radios Jay, who is inside the store, to keep an eye on Julianne, but they eventually lose her. They decide to go to Julianne's house to retrieve their money, but when they get inside, Julianne is overdosing and dies.

Julianne's house becomes a crime scene and the two detectives inform Voight on what happened and he tells them to check her phone to find her dealer. Denny shows up at the scene informing Voight that Julianne Hudson was the daughter of Judge Tommy Wells and how this case is top priority. Back at the district Adam gives Kim coffee as she comes into work and asks if she fixed the situation with her boyfriend, Matt Miller. She tells him that the situation is unfixable, implying that her relationship was over. Hailey and Jay update the team on their case saying they had no idea she was the daughter of Judge Wells. After checking her phone, they are able to ID her dealer as Vance Williams. Before sending the team to go pick up Vance, Voight reminds the team how Judge Wells used to be a cop before he became a judge. Voight visits Tommy Wells hoping to get more information about Julianne and her drug usage. Tommy has no information to give as Julianne isolated herself with the more drugs she used. Voight promises Tommy that he will find the person responsible.

Kim goes undercover at the bar Vance Williams works at trying to buy Oxy from him and gets him dirty. They arrest him and Voight and Al try to get him to flip on his supplier. Vance agrees to help nail his supplier if he gets full immunity. At the prosecution's office, ASA Anna Valdez hesitates with signing off on the deal. They are interrupted by Judge Wells who is surprised to hear that his daughter's killer is getting a deal, but agrees to it if it helps end the opioid crisis. They make the deal with Vance on the condition he sets up a meet to catch his supplier dirty. Later that night, Kim, Antonio, and Kevin are wait outside Vance's house waiting for Frank Barrett, the supplier, to show up. After waiting a while and realizing that Frank is a no show, they head inside the house to talk to Vance but find him dead. At the crime scene, they find a size 11 shoe print going out the back door, possibly from the shooter. As Kevin goes through the house, he finds $20K in cash hidden in the closet. Voight decides to take care of it but Adam is persistent on logging it into evidence. They are interrupted by Kim and Antonio who found melted prescription bottles in the fire pit all prescribed by Dr. Lewis Macy. They go talk to him about these prescriptions, but he claims that his office was broken into recently and his prescription pads were stolen. They ask whether Macy knows a guy named Frank Barrett to which he says no.

Back at the district, Kim updates the team on Lewis Macy, who has no connection to Vance and has an alibi for the night Vance was killed. They finally find Frank Barrett the supplier, who owns a bar called Blazes which used to be where Vance worked. Hailey and Jay pay him a visit and ask is he knows anything about Vance's murder, which he denies knowing anything. When asked for an alibi, Frank tells the two detectives that he was at his bar till closing. Adam and Kevin track his phone and trace a call Frank made right after talking to Jay and Hailey, which leads them back to Dr. Lewis Macy. Kim and Antonio go to arrest Macy but find him with his girlfriend, Andrea Scott, who clearly uses. When they confront Lewis about his phone call from Frank Barrett, Lewis tells them that Frank is his cousin. They bring both Lewis and his girlfriend to interrogate. Meanwhile Adam goes over the evidence folder from the Vance Williams crime scene and realizes that the $20K was never logged into evidence. He checks his wire that he had on at the crime scene, which shows Voight putting the $20K into his jacket instead of logging it into evidence.

Voight talks to Lewis Macy about his connection to Frank Barrett. Lewis tells him and Antonio that he and Frank are cousins and Andrea Scott is his girlfriend. He tells them that Andrea has a legal prescription for medical marijuana which helps with her migraines. Voight believes that Frank and Lewis are partners in an illegal opioid business, which Lewis denies, and he believes that Frank killed Vance to tie off loose ends. They try to get Lewis to flip on his cousin but he stays loyal. Instead, they try to use Andrea as bait to try get Lewis to flip, as the doctor is madly in love with her. They release Andrea and Jay and Hailey follow her. After following Andrea, they finally catch her buying drugs and arrest her before she uses again.

Meanwhile, Adam heads out into the parking lot and is startled to see Denny Woods waiting for him near his car. Adam is afraid of being caught but Woods doesn't care and asks whether Adam planted the $20K. Adam lies and asks for more time to plant the money and Denny gives him one final chance. Adam later meets up with an old lawyer friend, who he had a small fling with, asking for advice on his situation. Without giving himself away, he tells his friend what is going on and asks what consequences he could possibly face if he doesn't comply with Denny's orders. She tells him that the only end result would be jail time and losing his badge, which scares him.

Back at the district, Jay and Voight try again to get Lewis to flip, but this time they use his girlfriend bait. After being a bit hesitant, he finally agrees to wear a wire and get Frank to admit to killing Vance, so he can have a life with Andrea. Adam gets Lewis situated with his wire, and Lewis tries to back out of it, but Adam convinces him to do the right thing saying sometimes two wrongs make a right. At the meeting location the team spreads out having eyes on Lewis and Frank. Lewis tells Frank that he is worried the cops are going to find out about their business, but Frank assures him there is no way the cops can connect any of this to them. When Lewis asks about Vance, Frank gets suspicious and things go south quickly when Frank pulls a gun on his cousin. They lose visual on Lewis and Frank but hear a gunshot. The find Lewis bleeding in an alley and Frank is on the run. Hailey and Kevin go after him but can't find him. Eventually, Kim finds and follows him onto a bus trying not to blow her cover. There are kids on the bus and Kim is scared Frank might pull the gun on one of the kids. Eventually, the bus stops and Voight gets on, and before Frank can pull out his gun, Kim apprehends him.

Back at the district, Voight tries to get Frank to confess to killing Vance, but he claims to have an alibi. He left his bar early and went to meet another doctor to try do business, which checks out. Meanwhile Adam meets up with Woods and tells him the deal is off claiming to face the consequences. Denny tells him that it will be his last day as a cop, which Adam accepts and drives off. Voight pays Tommy Wells a visit telling him that Frank Barrett is being charged for Julianne's drug induced homicide. Voight and Wells share a memory from when Tommy was a cop which leads Voight asking Wells where his service revolver is. Wells claims to have lost it but Voight doesn't believe him. He tells Tommy that the ballistics from the Vance shooting is a match to a special ammo given to patrol officers during his and Wells' rookie years. He also informs that Wells' size 11 shoe print was found at the scene, implying that Judge Wells killed Vance Williams to get revenge for his daughter's death. Instead of denying it, Tommy tells Voight that nobody will believe him as all the judges in Chicago are good friends with him. Voight understands and instead asks for a favor.

Adam is packing up for the day, disappointed that it might be his last day as a cop, when Al asks him to come with him to meet a CI. When they get to the location, Adam is frightened when he finds out that Al brought him to see Voight. 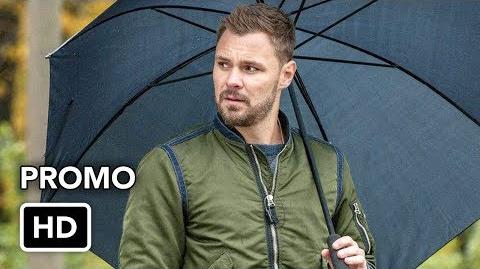 Ruzek: Voight is my family, that's what you don't understand. They're all my family. And I'm not going to give them up for the likes of you.
Woods: It's not a bridge that you want to burn son.
Ruzek: You're right. It's a bridge that I want to blow the hell up.

Upton: It's the new world of reform, everyone wants to bury a cop.