Politics is the eighth episode of Season 5 of Chicago P.D. It is also the 92nd episode of the series.

One of Voight's friends, Congressman Scott Graynor is found passed out in his hotel room with a dead Ukranian girl. When Intelligence discovers the murder is connected to a sting and Burgess' boyfriend is working with the Feds, Burgess must choose between compromising her case or her boyfriend's case.

Voight is at a social gathering hosted by Congressman Scott Graynor when he runs into Burgess. When asked how she got dragged into this fancy event, she tells Voight how her boyfriend, Matt Miller, who used to work with Graynor and is now a federal prosecutor, invited her. Later, Matt apologizes for being late to the event as he is in the middle of taking down the Odessa Mob, in which Kim teases on how she isn't his priority. As the evening continues, Congressman Graynor announces his plans for re-election and how he supports the men and woman in blue and giving a toast to Voight.

The next day Jay talks to Voight about how his bar fight in the Luis Vega case has created an issue with IAD. Voight tells him to keep his story short and it will eventually go away. Voight gets a call about a crime scene and breaks away right as Upton joins. Jay asks Hailey whether she reported his bar fight, but she is surprised and tells him no. After the last case, Hailey had sensed some tension from Jay and recommends that he talk to a therapist, but Jay quickly shuts her down, saying he doesn't need a babysitter. At the crime scene, patrol informs Voight about a dead woman in hotel room. In the same room, they find an unconscious man who happens to be, Congressman Graynor. Back at the district, Hailey and Jay update Voight on what they know so far. The victim is a Jane Doe and they recovered a gun from the scene with Graynor's prints on it. When they interrogate Graynor, he tells Alvin and Voight that he didn't do it. He remembers having a drink at the hotel bar after the party and met a young lady, Jane Doe. He can't remember anything after that and doesn't know how he ended up in his hotel but thinks he was drugged. He believes he was set up, claiming to have many enemies who don't like his politics. Voight doesn't believe him so decides to keep him in custody and Graynor complies as long as his name stays out of the press regarding the case.

Adam and Kevin go back to the hotel to check out the security footage, but the tapes go blank during the time of the murder. They decide to pay a visit to the guy in charge of security during the murder, Luke Ivey. Luke tells the officers he has no idea who shut off the security footage, claiming he was watching a fight on TV during that time. Voight pays a visit to Alderman Price, wanting to know whether Graynor could be responsible for the murder or if his story of being set up is legitimate. Price, who isn't a fan of Graynor, tells Voight that Graynor had many enemies, Bill Mahoney being at the top of the list. At the Coroner's office, the medical examiner shows Kim a GPS chip implanted in the Jane Doe's arm. Back at the district, Kim tells the team how she couldn't track the GPS chip and Jay shares that the tox report on Graynor proved that he was in fact drugged.

Kim and Antonio pay a visit to Bill Mahoney, hoping to get a lead, but it becomes a dead end when Mahoney shares his alibi. At the district, Hailey tells the team how the gun they found at the crime scene matches a shooting that happened a few days ago. Al and Voight go to med to talk the victim of the shooting, Irina Petrova. Irina tells them how she came to the US looking for her daughter Sasha. After showing pictures, Irina confirms that the Jane Doe is Sasha. She tells Voight and Al how her daughter and her friend came to the US for a modeling job, but three months later Irina got worried when she hadn't heard from Sasha. Two weeks ago, she got a message from Sasha saying she was a hostage. A man had taken her passport and money, so Irina came to Chicago to help her daughter. Voight shows a picture or Graynor to Irina, but she tells them that the man who shot her was bald and Ukrainian.

Back at the district, Jay shows the team pod footage of the shooting which shows a bald man shooting Irina in her car and walking away towards the hotel. After talking to a detective from robbery homicide, Hailey tells the team how there is a ring of Eastern European women who are identity thieves. They target wealthy men, drug them, steal valuables and credit cards. She tells them how the scam is run by the Odessa Mob. After checking Graynor's credit cards, Voight realizes that he was indeed set up and releases Graynor. Graynor is relieved and thankful towards Voight for not leaking his name to the press.

After hearing that their case could be related to the Odessa Mob, Kim decides to reach out to her boyfriend, Matt, hoping he can identify the man from the security footage as he is working on a case involved with the Odessa Mob. Matt is hesitant and asks Kim to talk to Voight and schedule a meeting so they can talk, which leaves Kim confused. Finding out that Kim shared information regarding their case to Matt, Voight gets furious and tells Kim how the Feds aren't going to help their case. After running the bald man's image through different databases, they find a picture of Luke Ivey with their suspect. When they go to bring him in, they find him shot dead in his house. After talking to neighbors, they are able to confirm that the bald man is the one who killed Luke.

Later Kim and Voight meet with Matt and his boss, Brian Macklin, to discuss the case regarding the Odessa Mob. Matt tells them that he recognizes the man from the footage but can't share the name because the feds are currently investigating him and his group. Brian tells Voight to stand down and wait until the feds are done with their investigation, and Voight agrees. But once the meeting is over, he goes against their agreement asking Kim to show photos of the hotel security footage from when Sasha died to Irina hoping to ID the friend Sasha came with. At the hospital Irina is able to identify the friend, Olene Zalenko. Trudy sends out patrol to look for Olene and gives Kim advice about her boyfriend situation, saying if he is important, she should take a step back from the case, but Kim tells her she has it under control.

Ray Price reaches out to Voight asking for a favor. He wants a picture of Congressman Graynor at the crime scene, but Voight tells him that Graynor is innocent. Price doesn't care and wants to use the image for blackmail purposes. Voight says no but Ray reminds him how he owes him a favor after the McGrady case. Voight tells Al about the ask and struggles to make a decision. Meanwhile, Hailey gets information about Olene being spotted at another hotel. She and Antonio head over to the hotel and find Olene in a room with an unconscious man in bed. Olene tells them how Yuri, the bald man, had taken her passport and money and had threatened to kill her family if she didn't listen to him. She informs them that the man who watches her, Alex, is coming soon to pick her up. Antonio and Hailey tell Olene to go with Alex hoping that he will lead them to Yuri. Olene is scared but Hailey assures her that everything will be alright. Once Alex picks up Olene, the team follows them to a location but soon realize that Yuri isn't there, which means the Feds tipped him off.

Voight is frustrated and yells at Kim for not understanding how the Feds work and she is saddened. Voight knows she is sorry and decides to use Kim to get their case back on track. Adam seeing how sad Kim is tries to comfort her, and she tells him how she truly likes Matt and doesn't want to screw up their relationship but Voight is making her choose between Matt or her job. Adam tells her that whatever decision she makes, it's going to be the right decision. The next day Kim meets up with Matt and comes clean telling him how Voight is asking the team to share pictures of their suspect to people in the Ukrainian village. Matt is frustrated by this and makes a call regarding the case. Alvin and Voight trace the call and find a location where Yuri is hiding. The team go to his location but when they get there, Yuri runs. Kim and Adam eventually catch him after a chase and arrest him. Brian from the FBI, is mad at Voight for going against their plan, but Voight doesn't care.

Voight meets with Price and decides to give him the crime scene photos that Ray asked for, telling him that they are even. Later, Voight gets a call from Congressman Graynor but declines it, feeling guilty for possibly ruining Graynor's career. Kim goes to Matt's apartment hoping to talk but Matt slams the door in her face instead. 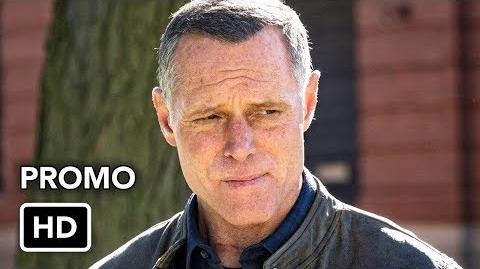 Burgess: Whether or not you agree with his politics, he's clean. Northwestern. Served in the marines. Active in his church. Married 17 years with two kids.
Dawson: Yeah, 'cause church-going men never cheat on their wives.