The Price We Pay is the seventh episode of the first season and the 7th overall episode of Chicago P.D.

Voight's son may be involved with the Fitori murder case, intensifying tension between Antonio and Voight. Ruzek helps Burgess get retribution.

Justin shakes out of his daze long enough to tell Lindsay the blood on his hands resulted from a bar fight. Maybe that's the case, but Lindsay can tell he's holding something back. When she lets Voight know about the surprise visit, he pushes it aside in favor of bigger fish: the discovery of a body with major connections to upstream criminals. Secretly, though, Voight's pushing the new investigation to get Internal Affairs (well, Gradishar) off his tail. Voight leans on one of his shadier contacts - a favorite of IA's named Colo - to squeal on a man in his circle, key murder suspect Catalano. Once Colo concedes, Voight corners the suspect in an alley and is all set to haul him back to District 21 until Catalano threatens to spill a detail that gives Voight pause... Justin was involved in the murder as the getaway driver.

Since he can't risk the suspect mentioning Justin's name, Voight releases Catalano and lies to Gradishar about Colo's involvement. But Gradishar's been following Voight and possesses photos that reveal Voight cavorting with Colo - photos she shows to Antonio during a secret meeting. After she details the nature of Voight's agreement with IA, Gradishar offers Antonio a new job as the head of Intelligence, on one condition: he must take down Voight.

Just as Voight throws out the case, Antonio reopens it in front of the whole team. He ID's Colo and Catalano as the centerpieces and within minutes the unit's got solid leads. Not that Voight takes this sitting down - he and Antonio butt heads in private, and Voight blinks first. That being said, when they catch a break and head to Wrigleyville to chase down the suspect, Voight loses him on purpose, hoping to buy time while Jin analyzes surveillance footage Voight's convinced will show his son.

And Voight's right - he and Lindsay get a first glimpse of undeniable images featuring Justin as an accomplice in the crime. Distraught, Voight revisits Catalano and applies more pressure. Catalano doesn't budge, but something in Voight's demeanor worries him...

Meanwhile, Lindsay tracks down Justin alone and makes a bold move - she brings him to District 21 for Antonio to question. When Voight finds out, he berates Antonio for not notifying him, only to discover Antonio's willing to ignore Justin's involvement in order to catch the real bad guy, Catalano, and - here's what sends Voight reeling - he knows about Voight's agreement with Internal Affairs.

Voight escorts Justin out and they share a brief heart-to-heart moment in the car that is eclipsed by their final destination: an Army Recruitment Center. Justin stares at his father, who instructs him to join and they'll see each other in four years' time.

A more pressing matter rises to the surface in the form of another dead body. Antonio takes the call and joins Voight and Gradishar at the Chicago River where Catalano's bloated corpse lays at their feet. Voight shrugs it off as a revenge killing - Catalano had enemies, after all - but Antonio and Gradishar suspect otherwise. Gradishar tells Antonio as much in her office while she rails against Voight's tactics. And that's where Antonio stops her short. He accuses her of burning an ex-partner of his fifteen years ago, stepping on him while she climbed the IA ladder. Antonio never forgot that - and he refuses to be her rat. 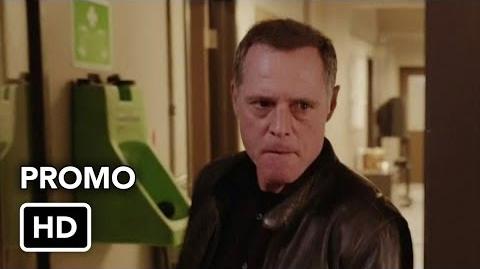 Halstead: I don't like being the guy you use to get a rise out of your father figure.
Lindsay: You wish I was using you.
Halstead: Oh, I'm serious. You have issues. You need to work them out. Work them out without me.
Lindsay: I repeat, we haven't done anything, and if you want to keep it that way...
Halstead: Hey, that'd be great.
Lindsay: Alright, perfect.
Halstead: Fantastic.
Lindsay: You done?
Halstead: I was done long before this conversation started.
Lindsay: Really? Then shut up.

Ruzek: Alvin, you're not listening to me.
Olinsky: Well, you talk so much it's hard to know when I'm supposed to listen and when I can just tune out.

Retrieved from "https://chicago-pd.fandom.com/wiki/The_Price_We_Pay?oldid=12961"
Community content is available under CC-BY-SA unless otherwise noted.