Turn The light Off is the eleventh episode of the first season and the 11th overall episode of Chicago P.D.

After a brutal, $8 million robbery, Intelligence discovers someone is killing off everyone involved.

Halstead and an attractive woman tear off each other's clothes and flop on the bed - a moment they've both been waiting for - and it seems like more than a one-night stand when she visits him at District 21. Lindsay takes notice, but Halstead stays mum.

A call sends Intelligence out to a bank robbery where a group of thieves lifted 8 million bucks - and killed almost everyone inside. Two dazed survivors - Perko and Gonzalez - nurse wounds and comply with questioning, yet only Perko offers up a witnessed account. Voight suspects he's lying - the evidence all points to an inside job - and later allows Sumner and Antonio to follow up in the hospital. Sure enough, Perko admits to covering for a guy he recognized from the Two-Threes, a Croatian gang. On that tip, Voight leads the unit to a Two-Threes hangout - only to find rooms full of dead gangsters. Someone's cleaning house. Further investigation muddies the waters - casings and at least one body indicate Colombian involvement. Did they rob the robbers? It's not exactly clear, until someone torches Perko in broad daylight, lighting him on fire with gasoline. Voight thinks maybe Perko organized the whole thing, until they discover his brother serving time in prison, and he admits his cellmate is a member of the Latin Kings who may have overheard the plan. The Latin Kings link adds up, and Intelligence lands a new target: Rolo Ramirez. Gonzalez, the other witness from the original robbery, comes clean and gives Voight and Olinsky a valuable lead - Ramirez likes high-end whores. In order to infiltrate the Latin Kings and nail Ramirez, Voight sets up an undercover sting - and Burgess volunteers to help. Lindsay hooks her up with Nadia (now a month sober) to legitimize them and it works - goons for Ramirez take the pair to a hideout. But one goon, Munoz, remains suspicious of Burgess, and in a tense moment, Nadia manages to cover for her by snorting cocaine. Burgess alerts Intelligence, and the whole team crashes in, apprehending Ramirez. Munoz beats Burgess and escapes, fighting off Ruzek on his way to a serious chase from Halstead. They end up in a bloody fistfight - and Halstead loses. Even though Munoz gets away, Ramirez gives up the location to the $8 million loot.

Bruised from his fight with Munoz, Ruzek joins Platt on an off-the-books "date" - she needs a fiancé stand-in to convince her rich dad to continue paying her Lincoln Park rent. It's an awkward meal to say the least, but Ruzek passes the test... until he suggests Platt just tell her father she's gay. Thing is, she's not. Ruzek officially has his foot in his mouth. So much for getting on Platt's good side.

Another awkward dinner takes place at the Corson house (the parents of the murdered kid Lonnie Rodiger killed) where Halstead enjoys a homemade meal - next to Allie, the attractive woman from earlier. Allie's their daughter and Halstead's high school sweetheart, who's only in town for one more day. Is this where their relationship ends?

Back at District 21, Commander Perry pulls Voight and Antonio into an urgent meeting. The higher-ups are none too pleased about Munoz's escape; they want to bait him out of hiding. And they've selected just the man for the job... Pulpo. The perp who kidnapped Antonio's son. 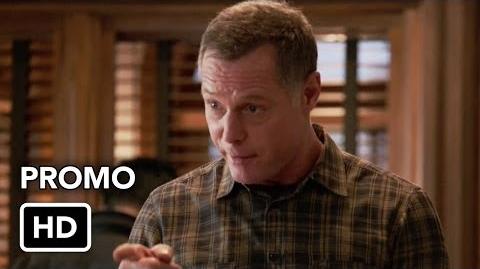 Voight: That was good intel. You can write the report on this one. Cuff him.
Sumners: Should I include the part where you shot an unarmed suspect?
Voight: No, you can leave that part out.

Retrieved from "https://chicago-pd.fandom.com/wiki/Turn_the_Light_Off?oldid=13018"
Community content is available under CC-BY-SA unless otherwise noted.